Monday, November 28
Trending Today
You are at:Home»Around The House»Nook vs. Kindle

Technology continues to bring us newer and better things. While there are hardcore bookworms who adamantly refuse to give up on traditional paperbacks, there’s a lot to be said about the convenience of an e-reader.

When in the market for an e-reader, you may be eyeing a model between the two leading brands on the market: The Nook and the Kindle. Indeed, the Nook vs. Kindle debate is one that many people new to e-readers are familiar with.

It may be a bit overwhelming to compare, say, the S2 Nook vs. Kindle Fire, because they’re different on many aspects, with all the unique bells and whistles that each model has.

Thankfully, we’re going to look at the different aspects of each, so that you could figure out whether a Kindle or Nook is right for you.

The Kindle, designed and marketed by Amazon, is one of the leading lines of e-readers on the market.

Ever since its first model was released, the Kindle has been one of the top players. To drive that point home, it’s worth noting the Amazon Kindle sold out within five and a half hours of its initial release!

Compared with the Nook, the Kindle has more experience with e-readers. It has weathered the storm despite the steep decline of e-reader sales.

Compared to the Nook, the Kindle stays true to its device’s function as books-centric, despite the rise of tablets that can do that job alongside other features.

The Nook, created by Barnes & Noble, is a series of e-readers based on the Android platform. In 2011, they came in close second for the number of e-readers sold worldwide.

While the Kindle has steadfastly held to their function as an e-reader, the Nook seems to have taken a different approach in addressing the rise of the tablet.

In its current line-up of devices, only one out of four devices can be considered a ‘true’ e-reader – specifically the Nook Glowlight 3. All the rest are tablets. When it comes to price, there doesn’t seem to be a clear winner.

What Kindles have going for them is their price range; the cheapest Kindle, the Kindle Basic, can be bought for as little as $80. Compared to other e-readers on the market, this model is by far the least expensive.

However, that price comes with a few setbacks, the most notable of which is the ads that it displays on the lock screen.

However, if you just want a device for reading books and aren’t bothered by the lack of features, then this could be a great value for your money.

When it comes to devices, battery life can be a deal-breaker. After evaluating the current line of Kindles and Nooks, we can determine that the Kindle overall has better battery life.

Kindles claim to be able to last up to six weeks on a single charge; of the current line of Nooks, only the Nook Glowlight has this same battery life.

It should be noted, however, that the other Nook models are considered tablets, which allows them to function as more than just e-readers. These models have a battery life of 10 to 14 hours on a single charge.

Different models have different screen features. That, while undoubtedly important, is often overlooked by consumers. The most important screen feature to consider is viewability. As a good rule of thumb, compare the viewability of your chosen model to that of a real book.

Is it easy on the eyes? Does it let you read for long periods of time, in different environments?

In order to achieve this kind of flexibility, both Kindles and Nooks have a range of features that can be found in their devices, so as to make the reading experience more enjoyable.

The most common feature included in e-readers is the anti-glare. This is important especially for those who like reading in bright light, such as when outdoors.

While tablets, phones, and computer screens struggle to contend with strong natural light, instead of going near-black as a response, an e-reader needs to take this in stride.

As such, if you plan on taking your e-reader to the park or your backyard, it’s best to ensure that the model you choose has this feature.

Of all the Nooks on the market, there is only one model that has anti-glare properties (the Nook Glowlight Plus).

And of course, the resolution of your device should be a top priority. You don’t want a fancy e-reader with terrible resolution.

Of all the Kindles on the market, the cheapest models (specifically the Kindle Basic and Kindle for Kids) have the lowest screen resolution of all (both at 167 ppi.)

Other Kindle models on the market have a screen resolution of 300 ppi. While the Nook doesn’t have models as cheap as the Kindle line-up, their Galaxy Tab S2 Nook has the highest resolution at 320 ppi.

Those who want a ‘true e-reader’ have a lot of options to choose from, and most will gladly let go of the extra 20ppi for a price cut.

However, those who want a tablet specifically may find the 320ppi of the S2 a great value, considering its price and functionality.

Nook vs Kindle: Size and Weight

When it comes to screen size, bigger is generally better, as long as your device has the screen resolution to keep up with it.

Most Kindle models have a standard size of about 7 inches in height and 4 inches in width, with a thickness of 10mm. 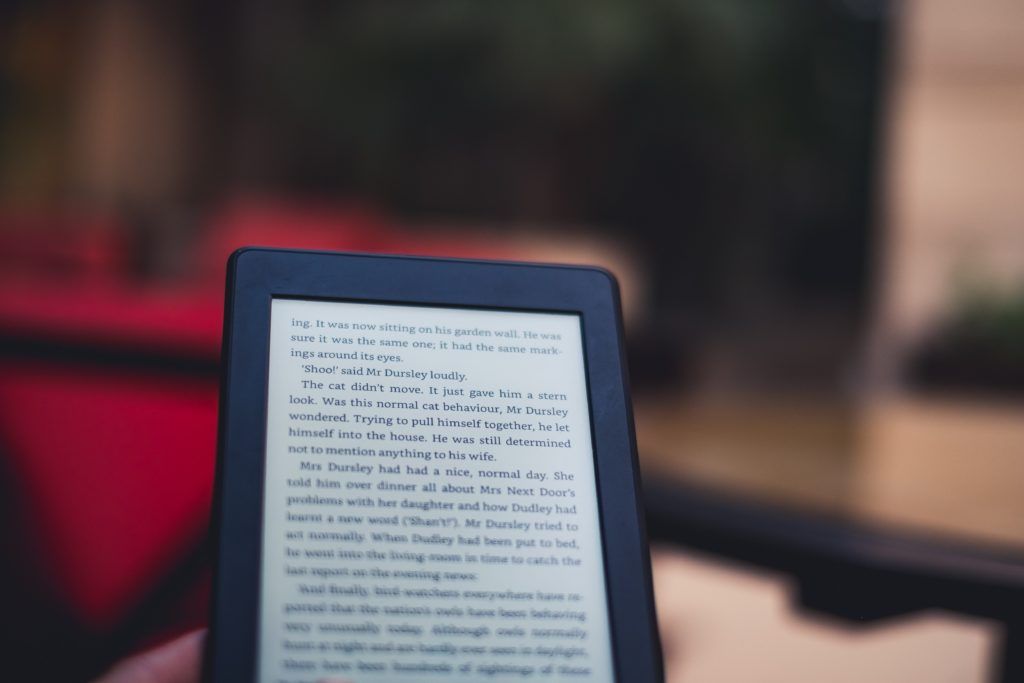 Of the Nook models, only the Nook Glowlight has similar specifications; the rest of the Nook line-up tends to have slightly larger dimensions.

When it comes to the size of the device itself, it’s mostly determined by your preferences. If you already own a tablet, chances are, you’ll want to have a device in a size that’s familiar to you.

Bulkier builds (like the Galaxy Tab E Nook with a height of 9.5 inches) can be a hassle to fit inside bags.

You’ll probably want an e-reader that is easy to bring around. However, if you’re more than happy to stay in one place to read, and don’t mind carrying the extra weight, a larger screen from the Nook line-up can be a good choice.

Here’s a video showing some differences between a Nook vs Kindle.

Some want their e-readers to function as just that—an e-reader. However, if you’re the type who wants more value for their money, it’s worth buying an e-reader with added features.

There are different functions that are offered by Nooks and Kindles, depending on the model that you choose.

These features are either made to enhance the reading experience or give you a few other abilities on your device, should you wish to take a break from reading.

The built-in light is a function that can be seen specifically in e-readers; it’s not like the flashlight on your phone.

This reduces the amount of strain put on the eyes since light isn’t shining directly at you.

All primary models of the Nook and Kindle have this function, save for the Kindle and Kindle for Kids.

However, the higher-end Kindle models have more variety with their built-in light function; different models have a higher number of bulbs, while some have the ability to adjust lighting automatically, based on external glare. When it comes to connectivity, all Nook and Kindle models are equipped with Wi-Fi connection capabilities.

However, it should be noted that the higher-end Kindle models (specifically the Paperwhite, Voyage, and Oasis) have 3G connectivity for those who want to download their books faster than the usual Wi-Fi allows.

We’re used to having cameras on pretty much all our devices, so why should our e-readers be any different?

In this regard, only the Nook line-up has camera functions available – specifically their tablet line-up (the S2 Nook, E Nook, and Nook Tablet 7.)

It should be noted that these models are technically classified as tablets, rather than strictly e-readers, which function mainly for reading. As such, you’re compromising in one place to gain in another.

When the Kindle Oasis came out in 2017, the waterproof capabilities of an e-reader suddenly became a reality – and the Nook Glowlight quickly followed suit.

While both are waterproof, they each have a slight difference between one another – specifically their rating.

When it comes to waterproof capabilities, the Nook Glowlight is more cost-effective, considering how it’s almost half the price of the Kindle Oasis.

After all, the chances of us intentionally dropping our e-readers in a deep body of water are slim to none, unless you’re specifically trying to test the limits of their waterproof rating.

However, most of us just want to read; waterproof capabilities are great for accidental spills, drops in the bathtub, or wiping down the screen when debris sticks to it. For these things, an IP67 rating is more than enough.

When it comes to memory, Kindles on the market today have a storage capacity of 4GB. This is also the same for the Nook Glowlight Plus.

Since other Nook models can function more like tablets than as e-readers, they have the memory capacity to show for it; the S2 Nook has 32GB, the E Nook has 16GB, and the Nook 7 has 8GB.

The memory capacity of all three models can be expanded. Of course, the most important element is the books.

When it comes to e-readers, the availability and the price of the books are the bread and butter of the entire device, so if one costs more than the other or has a more limited selection, that can be a deal-breaker.

As for the availability of books, the Nook sources its collection from the Nook Store. As a unique bonus, you can even read, free of cost, for an hour once per day in their stores while connected to the store’s Wi-Fi.

On the other hand, the Kindle sources its books from Amazon. While price comparisons are hard to pin down, readers say that Kindle books are cheaper.

If you’re always on the go, audiobooks may be better for you. They are a great way to ‘read’ a book, while still being able to do other things, like driving or running errands.

This video shows more details on the Nook vs Kindle bookstore.

So, which is better, Nook or Kindle? When it comes to choosing between these two brands, it first depends on whether or not you want it to function mainly as an e-reader.

If you want your e-reader to have other capabilities, then one of the tablets on the Nook line-up is for you. However, if you want to have a ‘true’ e-reader, then you have more options with the Kindle line-up.

If you want an e-reader that’s straight to the point, and you’d like to shop from Barnes & Noble, then the Glowlight is your choice.

While it doesn’t have the number of fancy bells and whistles that can be found in other Kindle models, the Glowlight still holds up well to competition, doing its job splendidly.

Of course, there’s always the question of durability. If you want a few more features to work with, like scratch resistant surfaces, or brighter, glare-free lights, then the Kindle line-up is for you.

At the end of the day, it’s about your own preferences, budget, and needs.

Which do you prefer? Kindle or Nook?